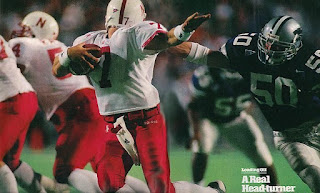 This game was very much in doubt until the very end.  K-State scored a touchdown with 5:25 to play to go ahead 34-30.  Jeff Kelly returned an Eric Crouch fumble 24 yards for a touchdown with three seconds left for the final margin of victory.

This was the ABC game of the week and the network’s top announcers Bob Griese and Keith Jackson were there to call the game.  K-State football and Manhattan had arrived on the national scene!

I found the entire broadcast of the game on YouTube and there are a lot of shorter highlight clip videos as well.

Here’s a clip of a touchdown from Michael Bishop to Darnell McDonald to put K-State up 21-17 in the 3rd quarter:

This clip makes me not only miss Bishop and McDonald, but Keith Jackson as well!

A fun fact about this game I had forgotten about is that K-State had six fumbles in this game and lost four of them!  Luckily Nebraska couldn’t really stop K-State other than turning the ball over.  If there were no turnovers in the game, it could have really been a blowout.

This victory propelled K-State to a number one ranking in the country and a trip to the Big 12 title game.  I won’t talk about what happened in that game!  The 1998 K-State football team is the best team Bill Snyder had in his tenure.  What great memories.