The 1994 K-State/KU football game is memorable for a couple of reasons.  It was a Thursday night ESPN game so it was on national television.  Not all the games were on national television back then, so it was kind of a big deal.  Bill Snyder was still getting things going at K-State and the last few KU games, with the exception of 1992, prior to this one were close games.

This game, which was played at KU in Lawrence, ended up fairly close as well, with a 21-13 victory for K-State.  The game wasn’t as close as the score indicated because K-State had a 21-0 lead and basically sat on the lead and got conservative as Snyder’s teams did a lot back then.  I remember K-State pretty much dominated this game.  It will also be remembered as the game where K-State fans stormed the field and tore down KU’s goalposts.

This game was notable for another reason.  It was the second game in what became a long streak of victories against KU.  K-State won 11 straight against Kansas and most of the games were blowouts. 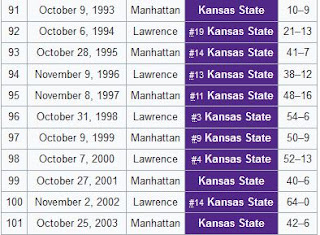 I watched this one in Aggieville at a bar that had dollar Coronas that night.  My buddies and I took full advantage of that special.  After the final whistle, we went outside and started the celebration in the streets.  The police eventually blocked off the street as the mob of fans descended on Aggieville.  We were high-fiving people in their cars that were driving by and my friend got his feet run over by one of the cars.  Good times!