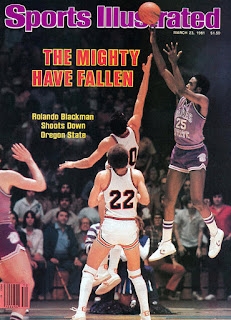 Without question Rolando Blackman is one of the greatest players in K-State history.  A Big 8 player of the year, member of the 1980 Olympic team, first round NBA pick and a four-time NBA all-star.  It was fun learning a little bit more about Rolando.  Let’s dig right in…
“Rolando Blackman is what basketball insiders would call a generational shooting guard. A two-time All-American at K-State, a member of the 1980 U.S. Olympic Team and recent inductee in the National Collegiate Basketball Hall of Fame, Blackman took his silky-smooth jumper to the NBA’s Dallas Mavericks where he became a four-time all-star.”…Big12Sports.com
JM:  That’s quite the resume.  Take another look at that Sports Illustrated cover and how high he jumped off the court on that game winning jumper against Oregon State in the NCAA tournament.  It was one of the biggest upsets in NCAA tournament history up to that point.  Here’s some video of the game winner..

“Being an immigrant is a very, very important thing in my life,” Blackman said. “My whole family immigrated to the United States. At the age of five, my grandmother decided that Rolando should go to the United States. We had to wait three years before I got this special piece of paper called a student visa. Then at the age of eight, in 1967, I had an opportunity to fly a Braniff International flight and come see the rest of my family and get a chance for the educational process that would really change my life here in the United States.”
“My grandmother is the one who took us in for three years before my mother came from Panama. She had me sit down many, many times in the evening and I’d watch Walter Cronkite read the news. I learned the language and the diction from him. I learned how to carry myself by watching him. That helped me a great deal.”…Big12Sports.com

JM:  Rolando learned English from Walter Cronkite?  He also learned how to carry himself from Cronkite.  Good stuff.

“In Panama you realize right away how warm the people are. They’ll walk up to you and say “hi, how are you doing?” And they really mean it. The same thing happened at Kansas State University.”…Big12Sports.com

JM:  Many variations of this sentiment are shared by K-Staters everywhere.  Every time I go to Manhattan I’m struck by how nice everyone is.  It’s only less than two hours away, but it’s like entering a different universe…in a good way.

“We had a great leader like Michael Evans, an All-American, my freshman year. He was someone I could look up to and understand. Coach Jack Hartman was a guy putting his best foot forward on your behalf. We had a great campus of people all around who cared and understood. I was in the Midwest and it was a wonderful time for me. I felt at home.”…Big12Sports.com

JM:  Remember when getting your degree was the most important thing for athletes? You hear less and less stories like this nowadays.
“The Mavs finally broke through in year four and reached the playoffs for the first time (in 1984). Mark Aguirre was Dallas’ leading scorer that season by averaging 29.5 points per game. Brad Davis was the starting point guard. He put up 11.1 points and 6.9 assists per game. Rolando Blackman scored 22.4 a night to give the Mavs a strong one-two punch.”…thesmokingcuban.com
JM:  Rolando was drafted in the first round in 1981 as the ninth overall pick by the Dallas Mavericks.  Just a couple years later he would help lead them to their first playoff appearance.
“Rolando Blackman with 18 first-half points and was doing whatever he wanted. Really impressive to watch.”…Jared Sandler, 103 The Fan
JM:   Jared was recalling game six of the 1988 NBA finals between the Mavericks and the Lakers.  Those Lakers were led by Magic, Kareem and James Worthy.

“Big win for the Mavs. Up until 2006, probably the biggest win in franchise history”…Jared Sandler, 103 The Fan

JM:  The Mavs took the Lakers to seven games in the 1988 Western Conference finals. Rolando averaged 16 points a game in those finals.

“3. Rolando Blackman: Almost a career Mav, the 9th overall pick of the 1981 Draft played with the Mavs until 1992 and thrice averaged more than 20 points per game, eight times averaging at least 18. Like Aguirre, he, too, was a part of that 1988 team and, unlike Aguirre, was always revered by Mavs fans remaining a part of the organization as a beloved ambassador and speaker to this day.  In taking Blackman where they did, the Mavs didn’t really miss on anyone. Those taken after Blackman included solid players but no one obviously more impactful. Larry Nance, who was drafted 12 picks later near the end of the first round, probably had a better career but its tough to say the Mavs missed on Ro when Nance wasn’t really taken in the same range”.…Jared Sandler, 103 The Fan

JM:  In April of 2020, Jared ranked Rolando as the third best first round draft pick of the Mavericks in their history behind Jason Kidd and Mark Aguirre.

“The Mavericks have retired three numbers: Derek Harper (12), Brad Davis (15) and Rolando Blackman (22). Dirk Nowitzki – the only NBA player to spend more seasons with only one team than Bryant – will also inevitably have his No. 41 retired by the team”…USAToday.com

“Blackman made what many believe is the most famous basket in Kansas State history, a 17-footer from the baseline with two seconds left against No.2-ranked Oregon State in the 1981 NCAA Tournament.”…Kansas Sports Hall of Fame

JM:  This is what Rolando is best known for, but as you can see there is much more to his story.

“Blackman was inducted in the College Basketball Hall of Fame in 2015”….Kansas Sports Hall of Fame

“Rolando Blackman is one of the great outside shooters in the history of the league.  A great career at Kansas State led to him being taken 9th overall by the Mavericks in 1981 and his 17,000 career points and an 18 point per game average showed that same ability in the pro ranks.  What is lost is how much of a great team player Rolando was.  He teamed with Mark Aguirre and Derek Harper to turn Dallas into a basketball contender in the 80s.  His two free throws after the buzzer in the 1986 All-Star game while all of the players from both teams watched and laughed was a signature moment for one of the most underrated players of the 80s.”…http://www.notinhalloffame.com/basketball/1720-34-rolando-blackman

I found this on a blog site listing ex-players that should be considered for the basketball hall of fame. The 1986 all-star game mentioned in the write up was a great moment for Rolando.  I enjoyed watching the video compilation of the moment and I included it below.  Hope you enjoy it as much as I did.