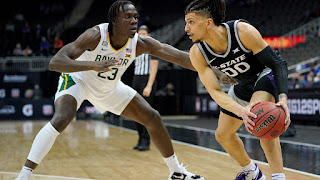 “Kansas State men’s basketball received some good news on Tuesday afternoon (March 23) when senior Mike McGuirl announced that he was utilizing his extra season of eligibility and returning to the Wildcats for the 2021-22 season.”…www.kstatesports.com, March 23, 2021

JM:  Mike McGuirl is coming back, which is some “good news” according to the official K-State sports website. Guess there’s been plenty of bad news lately with all the transfers, so it’s nice to get some positive news like this.  I wouldn’t have minded if McGuirl would have decided to move on, but fan reaction is mixed.

“This was an easy decision for me. The coaches and the Kansas State community have been so great to me and I wanted another year with my brothers on the team.”…Mike McGuirl, March 23, 2021

JM:  How many seniors do you think will return to their teams and play an extra season instead of calling it a career?  We will see.  Skylar Thompson decided to return to the football team, but he had a good reason since he was injured for a good portion of last season.

JM:  McGuirl was the most productive player on the Wildcats’ roster this season.  Bruce Weber is very happy to have him back…

“We are excited to have Mike back for his extra year…..He has the chance to become one of the elite guards in the Big 12 next season.”…Bruce Weber, March 23, 2021

“Gene Taylor, who has led K-State Athletics since 2017, has agreed to a contract extension through the 2026-27 academic year, President Richard Myers and the Kansas State Athletics, Inc., Board of Directors announced today.

The agreement extends Taylor’s contract through June 30, 2027, with an annual salary of $925,000 beginning in the 2021-2022 academic year. The contract also includes performance and retention incentives.”…www.kstatesports.com, March 24, 2021

JM:  Athletic directors make a million bucks a year now?  I went into the wrong profession.

“Gene Taylor has been a steady guiding force during a challenging time for Kansas State Athletics. The trajectory of our programs is moving in the right direction and he has demonstrated the ability to manage the budget with integrity under extraordinary circumstances. We see a bright future for K-State under his leadership.”…K-State President Richard Myers, March 24, 2021

JM:  Okay, I’m going to play devil’s advocate here.  The trajectory of our programs is moving in the right direction?  The football team went from 8-5 in 2019 to 4-6 in 2020. Men’s basketball is coming off two of the worst seasons in program history. The women’s basketball team finished 9-18 and tied for last place in the Big 12. That statement by Myers makes no sense.  In reality, it’s the exact opposite of what is happening.

“Oklahoma coach Lon Kruger announced his retirement Thursday, ending a 35-year Division I college head coaching career that included taking five schools to the NCAA Tournament — with two of them reaching the Final Four — and more than 650 career wins.

The 68-year-old Kruger led Florida to the national semifinals in 1994 and Oklahoma to the same spot in 2016. He is the only coach to lead five programs to NCAA Tournament wins — Oklahoma, Kansas State, Florida, Illinois and UNLV.”…Associated Press, March 25, 2021

JM:  I wrote an article about Lon Kruger last year that looked into his history at K-State. I have a buddy that coached volleyball at UNLV when Lon coached there and he said Lon was a great guy that hired a staff of high-quality individuals.  My buddy definitely wouldn’t say that about everyone he’s encountered during his time in college athletics.  I’ve enjoyed watching Lon’s teams over the years.  I wish him the best of luck.