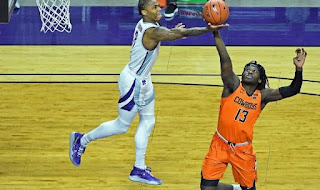 K-State lost to Oklahoma State 70-54 in Bramlage Coliseum yesterday.  Covid on top of injuries meant that the Wildcats were down to six scholarship players, the minimum required to play a game in the Big 12 this season.  Let’s take a look at what happened…
“Yeah I think I would’ve. Yes I thought for our circumstances, I would’ve not played it. I would’ve been alright with it. But then again you’ve got to do what the league says, you’ve got to do what the rules say and hopefully that’s why I’ve been able to stay in the business.”…Bruce Weber, post-game
JM:  This was Weber’s response when asked if he would have rather canceled the game than play it.  Unfortunately, with six scholarship players available they were forced to play it.  K-State was down to the minimum number of players allowed to play a Big 12 game, six scholarship players and two walk-ons, due to Covid-19 protocols.  Both Nijel Pack and Seryee Lewis were ruled out due to Covid. The Wildcats were already without Montaviuous Murphy, Antonio Gordon, Kaosi Ezeagu, and Luke Kasubke due to injury.
“Lost in all the news regarding the men’s basketball program and the football program is this Covid news regarding the women’s basketball program.  The athletes at K-State are around each other a lot, so this is something to keep an eye on going forward.  Let’s hope Covid doesn’t spread to the men’s basketball team, which could possibly result in some canceled games.”…Joe Mathieu, www.kstatejoe.com, January 3rd.
JM:  Almost prophetic!
“Thanks, Coach.  Hang in there!”… Kellis Robinett, Wichita Eagle
JM:  Kellis made this comment to Weber after his line of questioning during the post-game press conference.  I thought this was an odd comment for a reporter to make to a coach.  Weber sounded extraordinarily dejected during the presser and after Kellis’ comment, he didn’t even bother to reply.  There was just an awkward silence.  Weber was wearing a mask while answering questions and he was breathing through the thing like he was Dark Helmet in Spaceballs.  This is a zoom call.  None of the reporters were there in the room and Weber was in the room all by himself.  I found myself distracted by his mask and heavy breathing instead of listening to what he was saying.  It was just really odd. 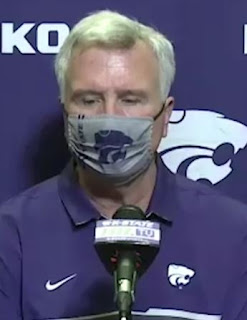 JM:  75 percent in the second half?  They made their last 13 shots!  Nuts!
“A good friend keeps telling me the season doesn’t matter.”…Bruce Weber, post-game
JM:  Bruce’s friends are also trying to help cheer him up.
“I promise you it does matter. All we can do is deal with the cards we’re dealt with and make the best of it.”…Bruce Weber, post-game
JM:  He’s right.  It does matter.  Otherwise why even play?
“Well I thought it was a good scouting report Coach Lowery did. We stayed in on ball screens and we made him be a passer.That was our whole thing. And he’s a great passer. And I think right before half they hit a couple of three’s that were really huge and got them the lead and we could never catch up after that”….Bruce Weber, post-game

JM:  This comment was made about Oklahoma State phenom guard Cade Cunningham.  The Wildcats held Cunningham to a career-low five points on one for three shooting.  That sure didn’t stop the announcers from performing verbal fellatio on him during the entire broadcast.  I was sick of hearing his name every ten seconds by the start of the second half.  And what’s with the announcers announcing the game from the man caves in their homes?  Can they really get a feel for the game and do their jobs effectively when they’re calling a game on television watching it like I’m watching it on my couch?  The answer is no.

JM:  Another futility record that goes back to the Asbury years.  Yikes. I’m getting depressed.  Let’s end on a positive note….

“Sophomore DaJuan Gordon collected his third double-double, all of which have come in the last 7 games, as he posted 14 points on 6-of-16 field goals with a game-high 11 rebounds and 3 assists in a career-best 39 minutes… It marked his 13th career double-digit scoring game, including his seventh this season… He has now double-digit rebound in 4 games this season.”…K-State Sports
JM:  If you’re still one of the few K-State basketball fans watching the games, pay attention to the play of DaJuan Gordon.  He’s doing it all out there.  Sure he’s making some mistakes, but he’s filling up the stat line almost every game.  He’s also among the league leaders in rebounds. This kid is going to be very good in the next couple of years.
Iowa State is up next on Wednesday.  Expect the same K-State roster that played against Oklahoma State to play against the Cyclones.  Iowa State lost by 27 yesterday to Texas Tech, so this might be one of the only chances for another victory this season.  I’ll be watching “from the couch.”