K-State beat seven seed BYU in the second round of the 2010 NCAA tournament.  Here are some notable quotes about the game…

“Pullen scored 20 of his career-high 34 points in the first half to help rally No. 2 seed Kansas State back from an early 10-point deficit, and the Wildcats turned away Jimmer Fredette and BYU 84-72 on Saturday night in the second round of the NCAA tournament”…Associated Press, March 20, 2010

JM:  34 points for Jacob Pullen in this one, a career high for him at that point in his career.  People seem to forget about this because of his epic performance against Xavier in the Sweet 16.

“‘I just couldn’t sit there and watch us play,’ Pullen said. ‘Unless something was broken [or] I couldn’t walk, man, I would have gotten back up and tried to play.'”…Associated Press, March 20, 2010

JM:  25 seconds into the highlight video above, you can see Pullen take a hard fall on his hip with about 6:45 left in the first half. He toughed it out and came back in and finished the game.

“K-State coach Frank Martin and his athletic team will face the winner of Sunday’s game between No. 3 seed Pittsburgh and sixth-seeded Xavier next weekend in Salt Lake City. The last time the school made it that far came in 1988, when Mitch Richmond was completing his college career before moving on to the NBA”…Associated Press, March 20, 2010

JM:  22 years between Elite 8 appearances for K-State. This was a big win.

“‘It’s an amazing feeling,’ Pullen said. ‘It’s a childhood dream. I’ve watched basketball my whole life. I watched all of the NCAA tournaments since I was a kid, so for me to be able to be in this position, I thank Frank all the time. It’s an amazing thing that he was able to give me the opportunity'”…Associated Press, March 20, 2010

JM:  Nice to hear Pullen give Frank Martin some thanks for giving him an opportunity.

“My recruitment wasn’t crazy. I didn’t have a million schools knocking on my door. I had some mid-major schools and then I had Frank walking through my door and telling me I could play.”…Associated Press, March 20, 2010

JM:  Jacob Pullen is probably one of the best players in K-State history and one day will probably have his jersey retired in the rafters of Bramlage Coliseum. Pullen once held some animosity towards Bruce Weber for not recruiting him to Illinois when Weber coached there.  It probably motivated Pullen to work even harder to prove his detractors wrong.

“Pullen ended up surpassing 30 points for the third time in his career while matching a career best with seven 3-pointers. Equally as important was his physical defense against Fredette, who had scored 37 points to get the seventh-seeded Cougars (30-6) past Florida in double overtime in the first round. Fredette finished with 21 points on 4-of-13 shooting, breaking his string of three straight games with at least 30 points”…Associated Press, March 20, 2010

JM:  Pullen was the star in this one, both on the offensive end and the defensive end.

“‘They turned it up a notch and put a lot of pressure on us,’ said Jackson Emery, who hit two 3-pointers in BYU’s opening 10-0 spurt. ‘It wasn’t a pressure that we haven’t seen before … but it took us a little while to respond to their pressure and to just counter that. By the time we did that, we were already in a hole.’..Associated Press, March 20, 2010

“‘They’re a great rebounding team. That’s what they do,’ BYU center Brandon Davies said. ‘We really emphasized stopping that, but they still found ways to get the rebounds when they needed them.’…Deseret News, March 21, 2010

JM:  BYU knew rebounding would be an issue against K-State, implemented some things to try to stop it, but still couldn’t.  Good stuff.

“‘They kind of wore us down,’ BYU head coach Dave Rose said. ‘Their depth was a real factor in the game, and how physical they were.’…Jason Franchuck, CougarBlue Daily Herald, March 21, 2010

“Wally Judge’s monstrous dunk at 7:40 off some slick passing, running the margin back to 64-54, was about all his team needed.”…CougarBlue Daily Herald, March 21, 2010

JM:  A Wally Judge reference!  You can see Wally’s dunk in the highlight video above.

“Only K-State would get the free-throw adulation.  Pullen credited daily practices where the team had to make a certain number to leave the gym.”…CougarBlue Daily Herald, March 21, 2010

JM:  Hey Bruce Weber, have you tried this strategy?

“After two free throws by Curtis Kelly with 5:33 in the half, the Wildcats had pulled to a 25-25 tie. Later, the Wildcats burst out to a 41-31 lead, treating their fans, who had replaced the dejected Kansas fans in the lower bowl, to the type of basketball they have become accustomed to.”….Dave Caldwell, New York Times, March 20, 2010

JM:  KU played in the same pod as K-State and had just lost to Northern Iowa prior to this game.  What a great day for K-State fans! 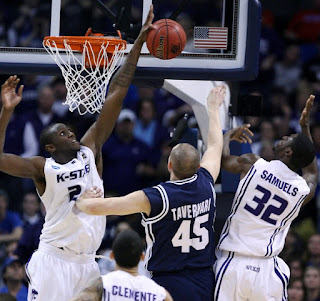