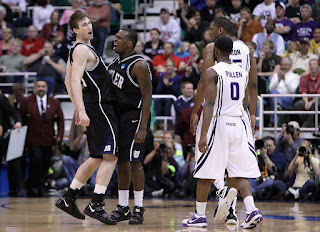 K-State’s 2010 run to the Elite 8 ended with a loss to a Butler team led by Shelvin Mack, Gordon Heyward and Brad Stevens.  All ended up in the NBA.  Let’s take a look at some of the key quotes coming out of that game.

Shelvin Mack scored 16 and Ronald Nored and Willie Veasley keyed an in-your-face defensive effort on K-State guards Jacob Pullen and Denis Clemente to help Butler become the first school from a true, mid-major conference to make the Final Four since George Mason in 2006 — a trip that also ended in Indianapolis.”…Associated Press, March 27, 2010

JM:  K-State was a heavy favorite in this one because of Butler’s mid-major status.  They had beaten Murray State 54-52 in the second round and got by number one seed Syracuse in the Sweet 16 63-59.  They beat K-State 63-56 in the Elite 8 and Michigan State 52-50 in the Final Four before losing to Duke 61-59 in the national championship game.  They would return to the national championship game in 2011, losing 53-41 to UConn.  This was a legit team with a couple of NBA players on it.

“‘This is probably the coolest thing that’s ever happened in my life,’ Nored said.”…Associated Press, March 27, 2010

JM:  Making the Final Four is a big deal.

“Trailing almost the entire game, No. 2 Kansas State (29-8) rallied to tie it at 54 with 3:09 remaining.  But Butler didn’t fold, it only got better. The Bulldogs scored the next nine points to seal the game before Pullen’s shot at the buzzer dropped — but offered no consolation.”...Associated Press, March 27, 2010

JM:  I don’t have a good memory of this game, but I do remember the team showed up flat out of the gate and when they made the run to tie the game I thought all was well.  Then the nine point run by Butler happened.  Game over.

Pullen and Clemente didn’t score a point for Kansas State until 15 seconds remained in the first half, and it was no matter of luck. Rather, it was the tough, in-your-face defense of Nored and Veasley that did it — smothering a pair of players who had combined for 53 points two nights earlier in a double-overtime win against Xavier.  Clemente finished with 18 and Pullen 14, but they shot a combined 11 for 30.”…Associated Press, March 27, 2010

JM:  Yikes.  Remember that quote in the last column about Pullen and Clemente being the best back court in the country?  They struggled mightily in this one.

“‘Defensively, they just try to hound everybody, try to stay in the lane, pack it in so there’s nowhere to drive,’ Pullen said. ‘Then they just send five to the glass every time. Did a good job rebounding.’…Associated Press, March 27, 2010

JM:  It appears it was Butler’s defense that won this game.

“Coach Frank Martin wouldn’t make excuses, but clearly that Xavier game took a lot out of the Wildcats — and it showed at the end.  ‘We looked tired. We were sluggish but I don’t think it was as much about our wrongdoing as it was Butler’s right-doing,’ he said.”…Associated Press, March 27, 2010

“Stevens found the players who fit his style — players who like to work hard, don’t back down from a challenge and don’t care that the big schools didn’t come chasing after them.”…Associated Press, March 27, 2010

“Kansas State, which was coming off a double-overtime thriller against Xavier, was clearly taxed.
The Wildcats’ star guards, Denis Clemente and Jacob Pullen, who were scintillating against Xavier, combined to make just 11 of 30 shots. In the final minutes, Pullen missed two 3-pointers and Clemente missed a 3-pointer and was short on a free throw.  Whether it was fatigue or the defense of Ronald Nored, Willie Veasley or Shawn Vanzant, the Wildcats’ guards could not say.  “I got no excuse,” Clemente said. “It just wasn’t going in.”…Billy Witz, New York Times, March 27, 2010
JM:  Witz has a little bit different take, mentioning K-State was a little tired from the overtime thriller against Xavier.
“’Mentally, we looked tired,’ Kansas State Coach Frank Martin said. ‘We were sluggish. They annihilated us on the glass.’…Billy Witz, New York Times, March 27, 2010
JM:  Butler beat K-State at their own game…defense and rebounding.
“Clemente, who finished with 18 points, and Pullen, who added 14, found their legs for a brief stretch late in the second half. They carried Kansas State back from a 10-point deficit to its only lead, 52-51, when Clemente sank a 3-pointer from the wing with 4:50 to play.  ‘I thought we had the game won,’ Kansas State forward Curtis Kelly said. ‘I thought all we had to do was make some stops and that would be it.'”…Billy Witz, New York Times, March 27, 2010
JM:  I also remember thinking that K-State would be fine after this run, but Butler had other ideas.
“Stevens called a timeout and settled his team. For most of the game, he was in sharp contrast to Martin, a former nightclub bouncer who spent many of his timeouts scowling or screaming at the Wildcats.  ‘I didn’t think we handled those last four minutes real well,’ Martin said.'”…Billy Witz, New York Times, March 27, 2010
JM:  Guess his point is that Stevens’ style is a better way to handle things in a big game such as this.
“Asked if his team, which had not been to the Final Four since 1964, blew an opportunity, Martin said: ‘Absolutely. We didn’t make free throws, we weren’t very good on offense. We stubbed our own toe.'”…Billy Witz, New York Times, March 27, 2010.
JM:  Frank contradicted himself with this quote.  He gave Butler all the credit in one comment but in this one squarely places the blame on the Wildcats.

The 2010 Wildcats might have been my favorite K-State team.  The 2008 Wildcats with Beasley and Walker were fun to watch, but this team was much more talented top to bottom and had Clemente and Pullen in the back court, Sutton, Kelly and Colon up front with Henriquez, Judge and Samuels coming off the bench.  Also, Rodney McGruder was a freshman on this team.  Might be the best K-State basketball roster put together in a long time.