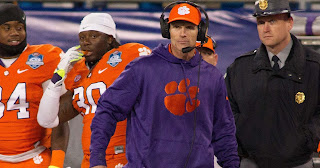 Brent Venables is often mentioned as a candidate to replace Bill Snyder at Kansas State.  Venables is 47 years old and is currently the defensive coordinator at Clemson.  He played at Garden City Community College in 1989-90 and at Kansas State for Bill Snyder in 1991-92.  He became a grad assistant at K-State in 1993 and served in that capacity until 1995.  He became linebackers coach in 1996 and coached linebackers at K-State until 1998.

Let’s take a look at where his defenses ranked nationally back to 2004.

He has coached multiple top 10 defenses and his defenses have been ranked in the top 10 the last five seasons.  His first year at Clemson they were ranked 65th, then moved up to 25th and then were number one in the country in his third year as coordinator.  He is getting better athletes at Clemson than he did at Oklahoma, but even at Oklahoma he got them into the top ten two years and in the top 20 three other years.

I think it’s fair to say the guy knows how to coach defense.  Can he recruit athletes to Manhattan?  Does he still have the connections in the area needed to get top athletes to come play for him?  Can he transition to become a head coach and still make sure he has a strong defense?  Those are the questions that need to be answered.  I think it would be worth a shot to bring him to Manhattan assuming he wants the job.