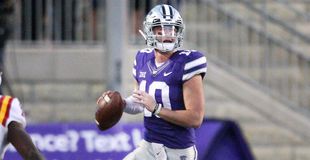 There is a lot of uncertainty going into the 2018 football season.  Who will be the starting quarterback?  How will the offense and defense look different with two new coordinators running the show?  Will it look much different at all?  Will the new linebacker corps be an improvement or will it take them time to get up to speed?  Who will step up on the defensive line?  Who will catch the balls thrown by Skylar Thompson and/or Alex Delton?

Those are just a few of the questions I have going into the season.  That’s what makes it very hard to predict what might happen this fall.  The constants are Bill Snyder as head coach and Sean Snyder as assistant coach and head of the special teams unit.  With those two constants, we can pretty much assume that special teams will once again be a strength and that the team overall will start slowly and gradually get better game by game as the season goes on.

I thought I’d try to break down the schedule and come up with a prediction for the team this fall.  So let’s drive right in.

Game one:  South Dakota at home.

South Dakota is a member of the Missouri Valley, which is an FCS conference.  They were 8-5 overall last year and 4-4 in their conference, so they’re not even one of the better programs in their conference.  With the experience we have coming back on offense and at quarterback, this should be a fairly easy victory.

Mississippi State was 9-4 overall in 2017, 4-4 in the SEC.  They were a bowl team last season, beating Louisville in the Taxslayer Bowl, whatever that is.  They did beat Auburn last season and lost by two against LSU, so they’ve shown they can compete at a high level.  Interestingly, they were 4-1 in away games last season, so they won’t be intimidated by going on the road.  This one is hard to predict.  I’m sure it will be a tough game, but I’m picking K-State in a close win.  Snyder will ground it out and eat the clock to keep it close and do just enough to earn the victory.

UTSA is a member of Conference USA and is an FBS program.  They were 6-5 last season, 3-5 in conference.  In their signature win of last season, they beat Baylor in Waco 17-10.  They’ve shown they can beat a bad Big 12 team.  I don’t think this one will be easy, but K-State should be able to do enough to pull out the victory.

West Virginia beat K-State 28-23 in Manhattan last season in a close game.  WVU won 17-16 in Morgantown in 2016.  KSU won 24-23 in Manhattan in 2015.  KSU won 26-20 in Morgantown in 2014.  Point is that recently these two teams play very close games.  I expect nothing less this season.  This one will be close and with the uncertainty on the defensive side of the ball, I’m going to predict a close loss.

Texas beat K-State last season in Austin 40-34 in two overtimes. Tom Herman is quickly building Texas back up to be a contender in the Big 12.  It makes this game hard to predict.  I’ll give K-State the slight edge because it’s at home, but I can see this one as a toss up that could go either way.

K-State beat Baylor 33-20 last season in Manhattan.  I’m expecting something similar this season.  I don’t see any signs that Baylor is going to have a huge turnaround, so this one should be one of the easier conference victories this season.

K-State beat Oklahoma State 45-40 last season in Stillwater in the infamous game where they almost blew a 42-13 lead.  In 2016, OSU won 43-37 in Manhattan.  In 2015, OSU won 36-34 in Stillwater.  These teams have played barn burners recently and I’m expecting more of the same this coming season.  I’ll give K-State the edge because it’s at home.

The Oklahoma game in Manhattan last season was pretty close. OU won 42-35 with Baker Mayfield at the helm.  In Norman in 2016 OU had an easy time, winning 38-17, but that was with Stoops as head coach.  Without seeing our team in person, there’s no way I can predict that we go into Norman and win since OU is a preseason top 10, maybe even a top 5, team.  So I’m predicting a loss here.

TCU won last season in Manhattan 26-6.  K-State won 30-6 in Fort Worth in 2016.  TCU won 52-45 in Manhattan in 2015.  TCU won 41-20 in Fort Worth in 2014.  Home field advantage apparently doesn’t mean anything when Gary Patterson and Bill Snyder go at it.  TCU handled K-State easily last season and I have no reason at this point to think K-State can beat TCU this coming season.  I’m predicting a loss, but this one is a toss up at this point.

K-State struggled for much of the game last season in Lawrence, but Bill Snyder found a way to beat KU yet again and he completely owns KU.  This one will be an easy victory.

Although the games are usually competitive, Bill Snyder completely owns Iowa State.  He hasn’t lost to them since 2005, which was the last season of his first stint as head coach.  He has beaten them every year since 2009.  I don’t expect that to change this season.  This will be a competitive game and another K-State victory.

I’m a bit surprised I predicted a 9-3 record, since I am usually the “realist,” which some people take as negative, regarding K-State sports.  I consider myself more objective than most K-State fans who look at the world through purple colored glasses.  I bleed purple, I just don’t wear the glasses!  Anyway, I’d be very happy is we happen to finish 9-3 with most of the team and the quarterbacks returning in 2019 to possibly compete for the Big 12 championship.  A lot of these games will be very close and competitive, so this prediction may be off because of games that could easily go either way.