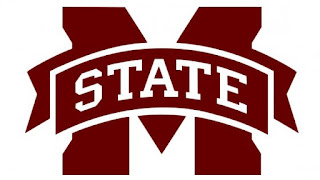 2)  Mississippi State plays in the SEC and is 2-0 so far in 2019, beating Louisiana Lafayette and Southern Mississippi.

4)  Mississippi State plays in Davis Wade stadium, which has a capacity of 61,337.

5)  Mississippi State has an all-time losing record against every SEC team except Texas A&M and Vanderbilt.  They are tied against Kentucky with a 23-23 all-time record against them. 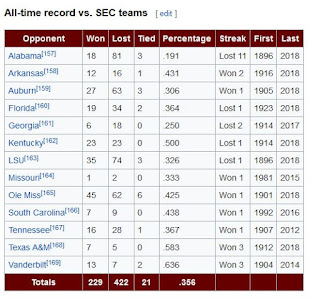 6)  The most resounding tradition of Mississippi State is the cowbell.  The precise origin of the cowbell as a fixture of Mississippi State sports tradition remains unclear to this day. The best records have cowbells gradually introduced to the MSU sports scene in the late 1930s and early 1940s, coinciding with the ‘golden age’ of Mississippi State football success prior to World War II. The most popular legend is that during a home football game between State and arch-rival Ole Miss, a jersey cow wandered onto the playing field. Mississippi State soundly whipped the Rebels that Saturday, and State College students immediately adopted the cow as a good luck charm. Students are said to have continued bringing a cow to football games for a while, until the practice was eventually discontinued in favor of bringing just the cow’s bell.

In early 1975, the SEC adopted a rule against artificial noisemakers that made it illegal to ring a cowbell during games.  In 2010, the 12 schools of the SEC agreed to a compromise on artificial noisemakers, acknowledging the role cowbells play in the history of Mississippi State University by amending the conference by-law. In the fall of 2010, on a one-year trial with specified restrictions, cowbells were permitted in Davis Wade Stadium for the first time in 36 years. Due to fans’ notable adherence to the rules outlined by the league, cowbells will continue to be allowed with similar restrictions in place. In 2012, the rule was made permanent by the SEC.  The restriction reads in part that fans are prohibited from ringing the bells “from the time the offensive center is over the football until the play is whistled dead.”

7)  Mississippi State was the first SEC school to hire an African American head coach when it hired Sylvester Croom in 2003.

8)  Mississippi State was created in 1878 as a land grant college, similar to Kansas State University.

10)  Mississippi State’s first-ever Bulldog mascot, Bully I, served in the early 1960s and cemented the legacy of Bully the Bulldog for generations to come. He’s now buried under the 50 yard line at Davis Wade Stadium beneath the players’ bench, forever connecting him with the university he spent his life representing,