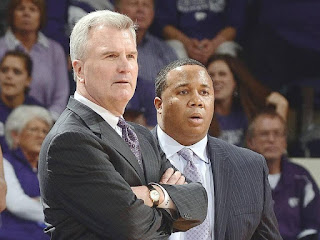 There has been some talk during and after K-State’s run in the NCAA tournament about the possibility of other schools making job offers to either Bruce Weber or Chris Lowery, Weber’s top assistant coach.  Both Weber and Lowery have had interesting coaching paths that have intersected at Southern Illinois, Illinois, and now at K-State.

Lowery was fired after eight seasons at Southern Illinois, which coincided with Weber getting fired at Illinois and taking the K-State job.  Lowery was hired by Weber to be an assistant at K-State and he has been there since 2012.

Lowery was with Weber from 2001-2004, two seasons at Southern Illinois and one season at Illinois, and then his entire tenure at K-State.

What does this mean?  Maybe nothing.  However, I believe that numbers talk and if Chris Lowery gets lured away by another program, I would expect a slight dip in Weber’s win percentage across the board.  These two seem to work well together and have had some success, so let’s hope that day never comes.