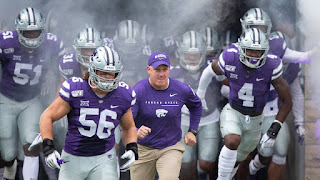 I have yet to find someone that isn’t pleasantly surprised with K-State football this season under first year coach Chris Klieman.  A lot of people were skeptical of the hire when it was announced because it wasn’t a splashy hire and Klieman hadn’t ever coached at this level.  Fast forward almost a year later and Klieman is getting mentioned as a coach of the year candidate after leading K-State to an 8-4 record.  Let’s take a look at how the season progressed and look forward to what next season might look like.

K-State started the 2019 season 3-0 in the non conference portion of the schedule, beating Nichols, Bowling Green and Mississippi State on the road.  The Mississippi State game was a seven point victory, was close the entire way and really could have gone either way.  Getting that win was huge for the program.

K-State started the conference portion of the season with losses at Oklahoma State and to Baylor at home in two games that were not really competitive.  K-State did not look good in either game and a lot of fans were legitimately worried about what might happen the rest of the season.

Klieman and the crew put those worries to rest with victories over TCU and Oklahoma at home and beating rival Kansas in Lawrence 38-10.  The victory over Kansas made K-State bowl eligible at 6-2.

K-State won the last two games of the year, winning by three at Texas Tech and beating a ranked Iowa State team by 10 in Manhattan.  The margin of victory over Iowa State gave the Cyclones their worst loss of the season.  The victory made K-State 8-4 and moved them up in the bowl selection heirarcy.

So where does this put K-State going into 2020?  Recruiting appears to be on the uptick.  K-State is currently ranked number 46 in the 247Sports composite recruiting rankings.  This is the best K-State has done in these recruiting rankings since they were number 36 in 2008.  Recruiting is definitely trending in the right direction, so that is a good sign. 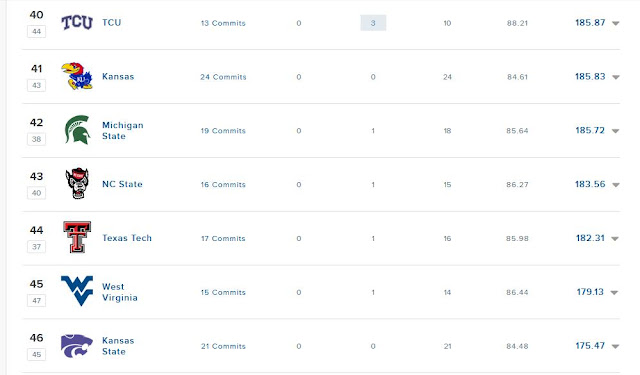 As for returning players, Skylar Thompson returns as quarterback in 2020.  At running back, Jordon Brown and James Gilbert are seniors, but there are a lot of underclassmen running backs on the roster to take their place, so I’m not really worried about the running back position.  Joshua Youngblood and Malik Knowles return at receiver, so that might be a position of strength going into 2020.  A lot of seniors on the offensive line are graduating, but there is plenty of depth at offensive line so I’m not really worried about that position either.

On the defensive side of the ball, defensive tackles Trey Dishon and Jordan Mittie are seniors as is defensive end Reggie Walker.  Wyatt Hubert is returning, but he’s going to need some underclassmen to step up and help on the defensive line.  At linebacker, Da’Quan Patton is a senior but Elijah Sullivan returns.  In the secondary, AJ Parker and Walter Neil return at corner, but safety Denzel Goolsby is a senior.  There are a few solid returning players on defense, but there will have to be some underclassmen step up and play well in order to have a good defense in 2020.

On special teams I think it’s safe to say we’re going to be good again at the return position with Joshua Youngblood.  Blake Lynch returns as kicker, but punter Devin Anctil will have to be replaced.

It’s fun to look ahead, but who knows what will happen.  What do you think?