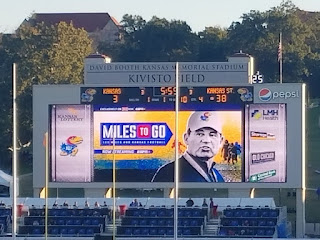 K-State played a great game Saturday against KU, winning 38-10.  Skylar Thompson ran for 127 yards and three touchdowns and passed for 129 yards.  This one reminded me a little bit of the way Bill Snyder’s teams used to manhandle Kansas.  While this was the 11th victory in a row against Kansas, it was the biggest margin of victory since a 45-14 drubbing of the Jayhawks in 2015.

Les Miles provided K-State with some bulletin board material when a viral video made the rounds last week showing Miles asking his team “who’s K-State?”  Guess he knows now.

As an update to my posts about the chances of K-State making the Big 12 championship game, everything I laid out that needs to happen did in fact happen this week.  So we’re still on track.  In addition, there is another path.  If both Baylor and K-State win out, they will meet in the Big 12 Championship game.  I’ll be honest, I still am not 100% sure whether this team is really good or if the last two weeks have been a smoke screen.  I think we’ll find out even more this Saturday at Texas.

Here are the current Big 12 standings: