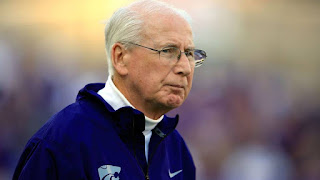 After a frustrating loss to the Texas Longhorns 19-14 yesterday, there is more heat on Bill Snyder than I can ever remember.  Kansas City Star columnist Sam Mellinger summed it up very well in his column after the game.  I’ve been on the fence regarding Bill Snyder for quite a few years.  Going between 6-6 and 9-3 every year and making a minor Bowl Game isn’t horrible, but it is wearing very thin.  It seems that this is “what we are.”  There are no signs of the program getting better and competing for a Big 12 championship.  No “light at the end of the tunnel.”  Recruiting has been piss poor the last few years, and that’s being kind.  When you have the 10th rated recruiting class in the Big 12 conference and that conference includes the University of Kansas, it would be a fireable offense if your head coach was anyone other than Bill Snyder.

The fact that Coach Snyder fails to see that Skylar Thompson, and not Alex Delton, gives the Wildcats the best chance to win on the field is incomprehensible.  Of course, he has never been a great evaluator of quarterback talent.  He failed to recruit future first round NFL draft pick Josh Freeman, who played high school football two hours away from campus, because he didn’t think he had what it took to play college football.  Probably the most glaring example of his poor evaluation of quarterback talent is when he had Marc Dunn and Ell Roberson on his roster at the same time.  He thought Marc Dunn gave the team the best chance to win, when in fact the entire fan base clamored for Ell Roberson because they could see by his play on the field that he was a much better overall quarterback.  Turns out the fans were right, because Roberson eventually led K-State to one of its two Big 12 Championships.  The other quarterback to lead K-State to a Big 12 Championship?  Collin Klein.  Former K-State player Travis Tannahill posted on his Twitter feed that in 2011 Snyder wanted Samuel Lamur to play quarterback instead of Collin Klein.  Unbelievable.

I could go on and on about the quarterbacks, but that’s not really the point.  The point is that Kansas State is 2-3 on the season and there is no light at the end of the tunnel.  In bizarre statements during his post game press conference last night, Snyder said he doesn’t think he would have put Skylar Thompson into the game earlier.  Alex Delton started the game and played the entire first half leading K-State to a 19-0 halftime deficit.  He was pulled at halftime and Skylar Thompson played the second half.  The offense scored zero points with Delton and 14 points with Thompson.  Let’s compare their stats.  Thompson was 8/18 passing for 96 yards with a quarterback rating of 60.3.  Delton was 3 of 7 for 14 yards with a quarterback rating of 8.0.  That’s eight, not eighty.  Delton had 16 carries for 27 yards, an average of 1.7 yards a carry.  Thompson had three carries for minus one yards, but did have a rushing touchdown.  Most importantly, running back Alex Barnes was much more effective in the second half because the Texas defense had to defend the pass as well as the run, which opened up a lot of holes for him that just weren’t there in the first half.

It’s frustrating to hear Coach Snyder brush off the glaring difference in quarterback play.  In fact, he was very stubborn in saying that both quarterbacks will play again next week and that it really doesn’t matter which quarterback starts the game.  Why is he defiant in recognizing who the better quarterback is?  Is he getting too old, and dare I say senile, to see it?  I fail to understand how a hall of fame football coach cannot see the difference in play between the two quarterbacks when the entire fan base and people watching across the country can see it easily.

The program needs a fresh look.  We cannot have the lowest ranked recruiting class in the Big 12 and expect to compete consistently in the Big 12 conference.  The lack of recruiting has caught up with Snyder this year.  He simply can’t “coach them up” anymore.  Nobody on the current staff should be considered as the next coach.  They are all having the same recruiting struggles that Bill Snyder is.  Recruiting needs to improve substantially and dramatically and very soon.  Only new blood will be able to accomplish that.

K-State fans deserve better than this.  Many of us spend our entire Saturdays in the fall attending K-State football games because we drive from long distances to go to the games.  It’s starting to become a waste of time.  I love college football like nobody else, but find myself increasingly frustrated, and even angry, when watching this K-State team play.

Bill Snyder is tarnishing his legacy the longer he stands on the sideline.  I don’t see another opportunity for a turnaround unless Coach Snyder calls it quits and a new coach is hired.  There is always a risk with any coaching change, but I believe it’s time to take that risk.