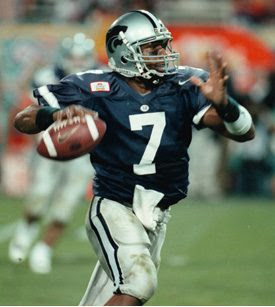 The number three K-State great game is the 1997 Fiesta Bowl.  K-State was led by Michael Bishop at quarterback and Syracuse was led by Donovan McNabb.  This was a “Bowl Alliance” game, which was the precursor to the BCS and eventually the college football playoff.  K-State entered the game ranked number 10 in the AP poll and Syracuse entered the game ranked number 14 in the same poll.

I found a highlight video of the game on YouTube:

Michael Bishop threw for 317 yards and four touchdowns in the game and Darnell McDonald had 206 yards receiving and three touchdowns.

This was the first “big time” national game for K-State under Bill Snyder.  The Fiesta Bowl was one of the major bowl games at the time and it was a nationally televised game.  Add to that the fact that K-State won convincingly with a great showing and this served as a springboard for K-State’s run for the national championship in 1998.