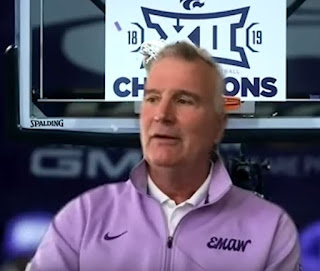 Bruce Weber spoke to the media on Wednesday about the incoming transfers and the upcoming basketball season.  Here are some quotes of note from the presser:

“I know a lot of coaches that I’m friends with that I’ve talked to. I was on the phone with (Missouri coach) Cuonzo Martin yesterday, (Purdue coach) Matt Painter the day before, (Michigan State coach) Tom Izzo last week late in the week. We’re all skeptical. I told President Myers last night at the baseball game that I worry about college basketball in the future, and I know change is hard for everybody and change is part of life.”..Bruce Weber, April 28

“I still go back to Coke and Coke Classic. Sometimes people make bad decisions and they have to go back and say, ‘What did we do? Did we did we mess this up?'”…Bruce Weber, April 28

JM: This guy never fails to come up with some gems.  Comparing New Coke/Coke Classic to the NCAA transfer portal?  There are probably some better analogies to use.

“I know we’ve all talked about staying old, and that’s been a big thing that everybody has talked about. How can you stay old? Well now you can stay old by getting in the portal. But I think it’s beyond that. Why did Baylor win? Not only were they old with average age of 22, but they also were together, and that continuity, that being together, playing together”…Bruce Weber, April 28

JM:  It’s kinda hard to “stay old” when you never “get old” in the first place.

“Well, first, we wanted some experience and Mark Smith was one that he’s played in the NCAA Tournament. Now you got two guys in Mike McGuirl and Mark Smith that have both played in (the NCAA Tournament). They’re older. We know Mark. We recruited him actually twice and this third time we just basically said, ‘Hey, we recruited you. Either you want to come here or not and you know what we’re about'”…Bruce Weber, April 28

“Then to add Ish (Ismael Massoud) late, it had to be the right player for that last spot, and he gives us some experience. He gives us a versatile big guy that can shoot the ball. He just seems like a great young man and a hard worker. (Former K-State and current K-State AD) John Currie text me and just said ‘you’re getting a great one.'”…Bruce Weber, April 28

JM:  Do you trust the judgment of John Currie?

“It was funny because (Missouri coach) Cuonzo (Martin) called me on a Wednesday or Thursday and it was early in the morning. I was kind of surprised by the call and he goes, ‘I just want to talk to you about DaJuan (Gordon)’. I did not want to lose him. He had his mind made up. I hope the best for him.”…Bruce Weber, April 28

JM:  I still think losing DaJuan Gordon will prove to be huge.  The “he had his mind made up” comment is concerning to me.  Coaches have to create an environment that players want to play in.  In today’s environment, they have to keep recruiting them even when they’re already on the team.  The transfer portal is an issue for everyone, but Weber leads the Big 12 in players transferred out.  That’s not a good sign.

“We want to emulate what Baylor did, where they had three guards that all could make plays. They could all handle. They could all pass. If we’re going to be the vision I want to be and what I think we can be, we’ll have not only Nijel and Markquis, but we’ll have Mark, Mike, Selton, everybody handling the ball, making plays, and it will make us much more effective.”

JM:  Everyone would like to emulate what Baylor did, including winning it all. You need the players to do it though.  Baylor had playmakers all over the court and they could all shoot at a high percentage.  I’ll believe K-State can do it when I see it.  Until then it’s all coach speak.