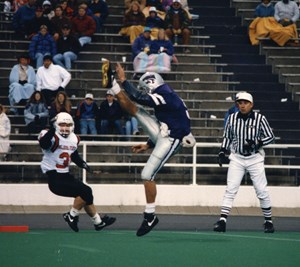 Sean Snyder was a member of the inaugural class of the K-State football ring of honor in 2002.  He was also inducted into the K-State athletics hall of fame in 2016. Here’s a little bit of information I found about his career as a football player and as a coach.

JM:  Sean was born when his Dad, Bill Snyder, was coaching at Foothill High School in Santa Ana, California.

“Earned first-team all-area and second-team all-district honors as a punter and kicker at Greenville ( Texas ) High School… In a game against Garland , he kicked field goals of 45 and 37 yards, and added two punts of over 50 yards… Also played baseball.”…www.kstatesports.com

JM:  Bill was the offensive coordinator at Iowa when Sean graduated from high school and Iowa recruited Sean. He punted at Iowa in 1989 before transferring to K-State when Bill was hired as head coach in Manhattan.

JM:  Sean had 80 punts for an average of 44.7 yards per kick in 1992.  A big game in the thin Colorado air helped with his overall stats that season…

“Against Colorado , he had eight punts of longer than 50 yards, including a career-tying 64 yarder… Had at least one punt of 52 yards or more in all but one game and booted at least one 60 yarder in four of 11 games.”….www.kstatesports.com

JM:  It’s a little strange seeing Sean in USC gear since he was at K-State for so long.  Maybe he’ll be back someday.

“FootballScoop is proud to announce that Sean Snyder is the 2015 FootballScoop Special Teams Coordinator of the Year presented by ProGrass.”…Football Scoop, December 29, 2015

JM:  Sean was also named special teams coach of the year by ESPN and Phil Steele in 2017

“If there’s anybody that would be here earlier in the morning or stay later at night, that would be (Sean). All of our coaches work extremely hard, but Sean’s got so much on his plate. Aside from dealing with the special teams, as he does with coordinating all of that, just virtually anything and everything that takes place — our interaction with the administration goes through Sean, our interaction with our strength development arena, our nutritional arena, with our medical aspect, with the equipment aspect, with our video aspect, game day operations that takes place — he handles all of that.”…Bill Snyder, Football Scoop, December 29, 2015

JM:  There’s no doubt Sean did a LOT during his time on staff at K-State.

“He’s also director of operations, and if you look at the list of responsibilities, it entails anything and everything that you think a head coach would be doing. He’s doing that, again, year in and year out. Put those two things together. There’s a football aspect of it, and a leadership management responsibility that goes along with it, and that pretty much encompasses what head coaches do.”…Bill Snyder, Kansas City Star, July 18, 2017

JM:  Bill strongly pushed for Sean to get an opportunity as head coach at K-State, but it wasn’t in the cards at the time.

“Sean Snyder tweeted a family photo Wednesday describing his son, Matthew Snyder, as having a “big heart” and a “desire to help others.” Police ruled Matthew Snyder’s death last month at his home in Manhattan a suicide. Matthew Snyder also was the grandson of head coach Bill Snyder.

“Sean Snyder said in the tweet that he and his wife, Wanda, are grateful. The message said, “There are no words that comfort or mend the emptiness we have.” But Sean Snyder added that it has been comforting to hear stories about his son, whom they will ‘forever miss.’”…Associated Press, February 8, 2018

JM:  Tragedy struck the Snyder family in January of 2018.  So very sad.

“I have a strong passion to be on the field as a coach, and that opportunity wasn’t there for me at K-State. This was. It’s a phenomenal opportunity, but my passion for coaching young men and being on the field and being able to coach them there in that walk of life of what they do, that’s been a strong passion I’ve had and enjoyed. I just wasn’t ready to give that up. So the opportunity presented itself, and I jumped on it and took it.”…Sean Snyder, Manhattan Mercury, February 25, 2020

JM:  While I believe Sean still bleeds purple, I’m glad he got the opportunity to get back into coaching.  And it appears that USC fans love what he’s doing so far….

“USC special teams were often much maligned and rarely performed to expectations. All of that changed when USC hired Sean Snyder to run its special teams. “…Josh Webb, USA Today, December 12, 2020

JM:  This is just one quote of note from an article by Webb talking about how much USC’s special teams units have improved since Sean Snyder was hired.

JM:  Bill is still a proud papa pointing out when his son does great things.

My goal is to get one of these posts out a week during the summer.  I may or may not always hit that goal, so please bear with me.  Next up on the list is Gary Spani.