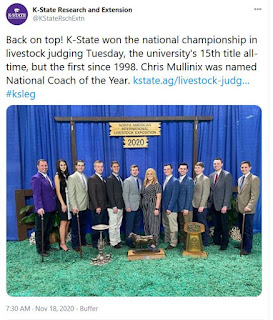 A bye week for the football team doesn’t mean there is a lack of K-State news.  Let’s dig right in and see what’s going on in the world of K-State sports…

“Back on top! K-State won the national championship in livestock judging Tuesday, the university’s 15th title all-time, but the first since 1998. Chris Mullinix was named National Coach of the Year.”…K-State Research and Extension Twitter Feed

“The Wildcats lost another player Wednesday when Will Jones, a redshirt freshman defensive back from Mansfield, Texas, announced plans to transfer.”…Kellis Robinett, Wichita Eagle, November 18

“I don’t really have a reaction to it in the sense that everybody has a different situation and everybody has a different circumstance. I am excited about the guys that have stuck with each other and have stuck together for their teammates, but it’s not easy. I’m not condemning anybody that has left or opted out. Everybody has their own reasons and I respect all those reasons. Everybody is going through some of this stuff, whether it is a kid who is opting out or a kid who is deciding to leave the program.”…Chris Klieman, November 18

JM: 10 transfers in one season is concerning to me, but if Klieman isn’t concerned then I’m not going to get my blood pressure up about of it.

JM:  Dr. Frank Tracz made the announcement on Monday, citing an increase in Covid cases among band members….

“Our exposure numbers have gone up faster in the last week than they have the entire semester. We have many students waiting for test results, many have already moved home, and the forecast for the major metropolitan areas like KC, Wichita, etc. are not promising. Most of our members come from these populated areas.”…Dr. Frank Tracz, November 16.

JM:  Covid cases are up everywhere so this is not necessarily a surprise, but it is nonetheless disappointing.

“K-State Athletics announced Tuesday (November 17) that the general public will not be permitted to attend men’s and women’s basketball games inside Bramlage Coliseum through the remainder of the month of November. The decision follows that of the University to cancel its commencement ceremonies that were set for Bramlage Coliseum Friday through Sunday.”…K-State Athletic Department, November 17

“He’s getting closer. He hasn’t put on pads yet, but he’s been running around a little bit, so I’m optimistic. It might be a game-time decision in seeing how he responds, but we’re making improvements from last week.”…Chris Klieman, November 18

JM:  Klieman was answering a question about tight end Briley Moore.  It would be really nice to have Moore back against Iowa State on Saturday.

“Kansas State picked up one of the top high school players in Wisconsin on Wednesday with the signing of big man Logan Landers to a national letter of intent.”…Arne Green, Topeka Capital Journal, November 12

JM;  This basketball signing kind of went under the radar.  247Sports lists Landers as a three star recruit.  Bruce Weber seems excited about the signing….

“Logan is a very, very skilled player. He is a good passer and can do a lot of things with the basketball. He has really developed into a very good 3-pointer shooter, which will give us even more versatility on the court.”

JM:  A 6’10” center and the first two things Bruce Weber mentioned about him is his passing ability and his three point shooting ability.  Aaaaaalrighty then!  How about recruiting a center that can score at the rim and is a great rebounder?

I am now writing for Heartland College Sports, a multimedia company that covers Big 12 sports.  It’s a great opportunity for me that happened in large part because of the readers of this blog.  I really appreciate all the likes, shares, and positive comments that I’ve received.  Check out my work at Heartland College Sports at https://www.heartlandcollegesports.com/author/olathecat/.  Thanks!